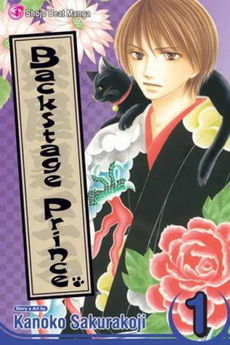 Summary: Drawn into the exciting world of kabuki theatre, young Akari spends her time after school assisting the famous actor, Shonosuke Ichimura. In the real world, however, this prince of kabuki is actually a high school cutie named Ryusei. The pair’s relationship gets off on the wrong foot but eventually, with the help of a cat known as Mr. Ken, the two teenagers fall in love. – Shojo Beat

What might’ve caught your interest here is the use of the theatre art of Kabuki into this manga. If it is, I’m sorry to disappoint –  although the story revolves around it, it concentrates more on the romance rather than feeding the reader cool facts about Kabuki. There’s only pretty drawings of people ‘performing’ and really not much else. I can’t even bring myself to say it had bits and pieces of information – it’s more like crumbs. Even then, they mostly occupy the extra pages rather than being incooperated into the story. If you want a more theatrical devoured shoujo, try Orange Chocolate instead.

The story will pretty much fulfill any male tsundere lover’s dream – this hero would probably die for his maiden anytime and anywhere, on the spot. Romance is in control 99.9% of the time, and I find it adorable and cute rather than sweet or something steamy.

I knew beforehand that Backstage Prince was a short story collected into two tankōbons, so I felt like the story was a bit hasty and rushed at times – in fact it feels rather like a one-shot. When relationships are rushed in a story, the outcome can often be quite cheesy rather than romantic. Backstage Prince does show minor evidence of this. It’s similar to this scenario:

I need some progression! It’s not exactly a big issue, everything does flow; it just flows too quickly.

The heroine of the story is distinguished as an ‘ordinary girl,’ with not much self-esteem(very common, but at least this one has some guts). I’m sure plenty of girls out there would read Backstage Prince and relate it to themselves(which is why I think this type of character is popular). Who doesn’t want their own hawt protective tsundere who buys them Anna Sui jewelry?

The character body proportions are really good and they resemble humans – they’re not changed, or what I’d like to call ‘manga-fied.‘ The ‘attractive’ people are really drawn well and the costumes are also really pretty. The art is somewhat unique, I can recognised her more popular work, Black Bird. However, there are quite a few mangaka’s work that carry that distinct style as well.

It’s a pretty different approach to a school life/slice of life shoujo manga; the guy’s a Kabuki celebrity besides what we’d usually expect as just ‘that popular boy’ in high school. Most of the story is pretty much confirming and testing their love, so give this story a go when you’re feeling down and just need to regain hope in love – or maybe even to just make yourself go ‘u-waaaah,’.