Summary: Young Mikan runs away to Tokyo following her best friend, Hotaru, who has been enrolled in an exclusive, secretive private school for geniuses. But it turns out that Alice Academy is a lot more than meets the eye. If Mikan wants to stay by Hotaru’s side, she has to both pass the strange “entrance exam” and face the even greater challenge of befriending her very odd new classmates. Whether it’s Hotaru’s gift for inventing gadgets, the cranky Natsume’s fire-casting ability, or Professor Narumi’s control of human pheromones, everyone at the school has some sort of special talent. But what ability, if any, does Mikan possess? Mikan is going to have to rely on her courage and spunk if she’s going to stay in school, or even stay alive!

The last manga I reviewed was High School Debut; I selected it since school was about to start so I thought it was a good entrance for the new year! Now that our dear students are a few weeks back into class – probably moaning and dragging their feet around in school – I thought I’d review a manga which has a big twist on school life to make the lives of students more exciting.

Or at least, in their minds even if not in reality.

Gakuen Alice creates the sort of school life we all dream of having (at least, I have that dream). Who does not want to be in a super-school with super-powers and to be treated specially? This is X-men gone right, who cares what the normal people think. Puh.

The story allows for many interesting characters. Each one of them are memorable with the aid of a distinct super-natural power. It also sets up great potential for a wonderful journey and it hints for a deeper story besides simply giving some 10-year olds special abilities – you just can’t wait to see how their powers develop the story.

A part of the humour is executed in a really witty manner but having said that, the humour is quite universal. I wouldn’t exactly call it slapstick comedy – it’s in your face but with a touch of intelligence. There’s enough comedy to make everyone happy in Gakuen Alice. It’s sort of like the type of humour you get in a scenario where you find yourself witnessing a dispute between two fine English gentleman in the Victorian Era, when one removes his glove and uses it to slap his nemesis’ cheek. Gakuen Alice might look like a 10-year old’s manga, but can one as young as that burst out laughing when Hotaru says “the prime thing in the world is money?”

Tachibana Higuchi draws very pretty detailed art with some cute-ness added in – but more pretty than cute. I hesitated to use ‘beautiful’ as it would be much too serious of a word. The first volume doesn’t spark any romantic build-up though there is great potential for that in the future. It concentrates on where the characters’ powers will lead them, and that is one of it’s main appeals. It’s a story where anything can happen; it can’t be limited to it’s own genre and it’s universally appealing; thumbs up for a great super-natural adventure. 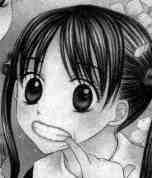 review. It’s quite ironic since I also dread the task. I need to plan the content out and gather my thoughts and etc. Mushroom Manga posts are so much easier to write~but in the end, I still love what I’m doing! Hope you guys enjoyed this weekend’s one-shot, arawr couldn’t stop ranting about it. Glad the shounen side of M.W is picking up too. fufufu~