Hello my dear chums, what an inevitable thrill to have you all again. It’s been quite a bit of time now since I last shared the Starry Sky BGM Collection CD with you and just to enlighten confused minds, the Gakuen Alice Illustration Fan Book came in the same shipment. The product name is ‘Gakuen Alice Illustration Fan Book’ but the book itself actually says ‘fun’ instead of ‘fan,’ but oh well. I won’t add any captions but my comments will be posted UNDER each picture.

I played with the contrast & colour saturating tool a bit. They seem to make the photos more mystical…or that’s just me. By the way, this art book was released in 2007 which makes me VERY behind and quite a lot of the illustrations are already scanned and posted on minitokyo. So, if you ever want them as your background etc, you can get them there. If you follow Gakuen Alice you’d know that the story has entered its Final Arc, therefore there’s a chance that a new art-book will be released which would be good news to me!

Natsume & Ruka on the back cover. The book itself is the size of the Lala DX magazines which is B3 or B5? I need someone to clarify this, anyway it’s smaller than monthly manga magazines. 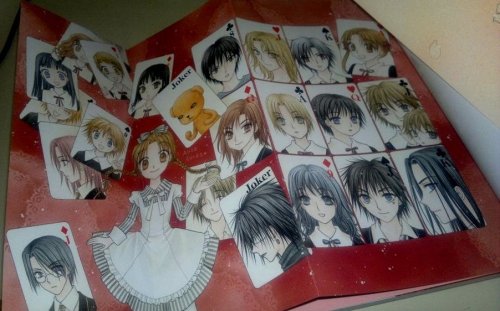 I’d love to get my hands on these play-cards! I’m sure there are some available! 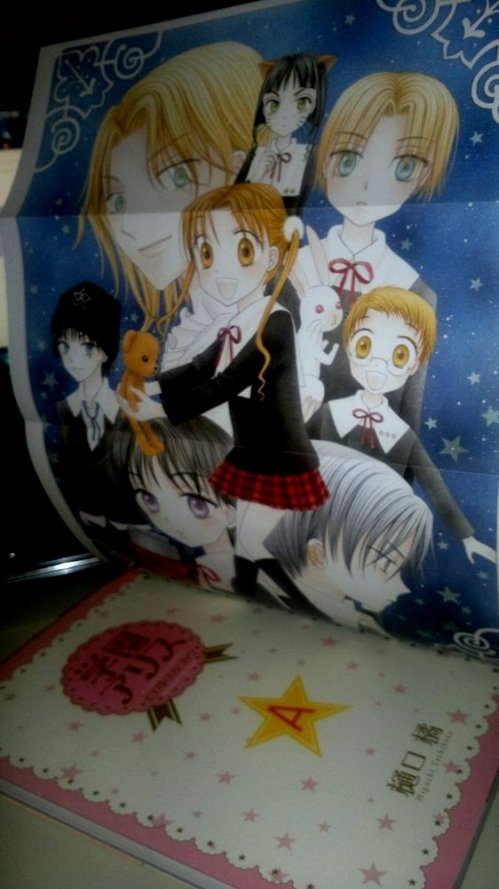 This photo is a little blurred, forgive me. It’s a larger illustration hence the flip out. Very pretty no? I love Tachibana Higuchi’s wonderful art style, it’s like water-colour but its colours are rich…

I LOVE YOU BEAR. 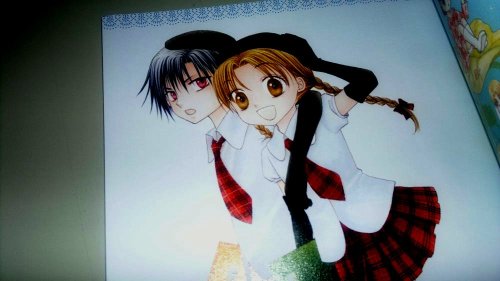 So sweet…even though we never saw them like that.

Another scene we’ll probably never witness in the Gakuen Alice story, thank goodness for illustrations! Took this and the below photo in yellow-ish lighting hence the outcome. I think it still turned out quite nicely though. 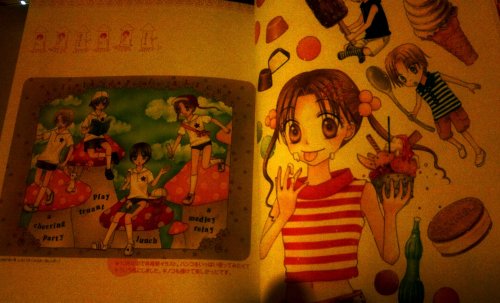 The yellow-ish tint gives it such a nostalgic feeling…sepia…

This is a compilation of all the illustrations that were featured on freebie cards!

Compilation of the black & white drawings in the manga. Look at the young Narumi-sensei! I loved his background story, so touching T_T. I love how Hotaru punched that dude too, I forgot what’s his name but I remember quite liking him, he’s like a ditz and Hotaru’s a genius.

Let’s study! Applies to me right about now…I love penguin to death…so sad… 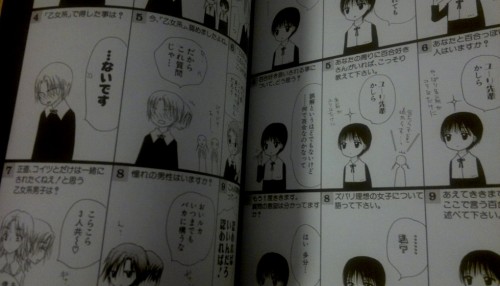 This was a good addition to the art-book, 9 question interviews for each of the 20 main characters in Gakuen Alice. Ruka’s questions were funny, “What have you gained from being a female oriented character?” Lol. 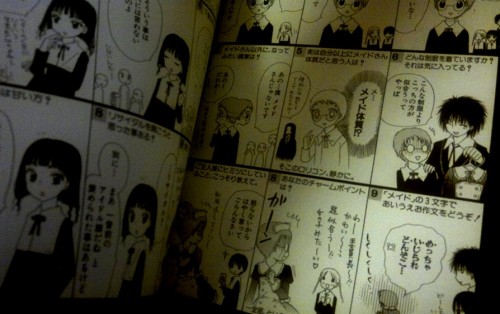 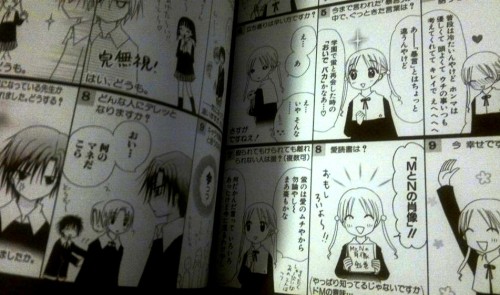 Mikan is just precious. Natsume’s ones were hilarious!

“Do you know what a tsundere is?”

Nat: How would I know and etc…

“Then why you getting mad?” 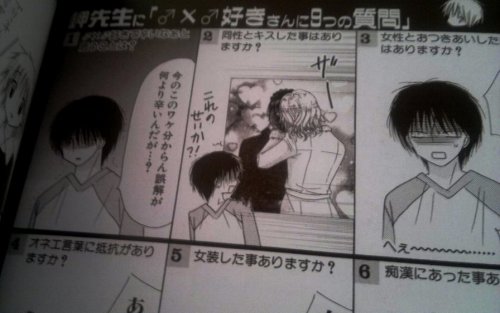 I left this illustration to end this post, one of my favourites. So pretty but I accidentally left that orange-y paper there oops. I hope you enjoyed the pictures so far. If you’re a Gakuen Alice fan, this is a must-have in your Gakuen Alice collection! Support Tachibana Higuchi-sensei! It’s a very high quality art book!

I got my copy from YesAsia.com for about 11 British Pounds which I think is reasonable considering that artbooks are extremely expressive overall. I thought it might cost me 20+++