Yes, you can tell how impatient and eager I am for the autumn line-up seeing as the summer anime hasn’t even had a chance to start. Ah well. I’m mainly doing this post since one of my favourite manga is being adapted into an anime for the fall, and since I was at it I thought I might as well add a few others.

My main source for all the anime listed here is from Fan Sub Wiki. The other sources I cite are mostly those I found after I went through my main source; you can find articles all over but I’m not gonna cite every single friggin one I found

After writing up this whole article, I kinda feel like this fall line-up is actually a whole lot more interesting than the summer

Anyway! Let’s start with the one I’m most excited about! =D

All her life, Chihaya’s dream was to see her model sister become Japan’s best… That is, until a quiet, unassuming transfer student named Arata tells her otherwise. A dream, he explains to her, is something she needs to work at herself. Arata plays a competitive version of a traditional Japanese card game–known as Hyakunin Isshu–in a way Chihaya has never seen before. After taking Arata’s place in a game, Chihaya discovers she has a passion for it. Now Chihaya wants to become number one in the world, the Queen of Karuta.

I was super excited when I found out this was being adapted into an anime. I follow the manga, and it is really, really good. Worth every single scrap of time you may or may not have. It’s about a game probably nobody outside Japan would have heard of –karuta. It doesn’t really matter to me though – I’ve read stuff like Eyeshield 21 (epiccc), Saki and Ookiku Furikabutte without understanding what the hell was going on in the first few chapters (I still didn’t understand crap about mah-jong by the end of Saki) but I still really, really enjoyed the stories. These sports manga really emphasises dedication, perseverance and teamwork – themes I really like.

After the outbreak of the unidentified virus “Lost Christmas” in 2029, Japan has been under the control of a multi-nation organization called GHQ. Ohma Shu is a 17 year old boy who has a psychic power in his right hand. He can use the power “Ability of King” to extract tools or weapons from his friends. He has been avoiding making trouble for others but his life changes when he meets a girl Yuzuriha Inori, a member of a resistance guerrilla group called “Undertaker”, whose members pilot mecha weapons to fight against the government.

I went over to the website and damn this thing looks cool! The style is really Deadman Wonderland-ish, the summary sounds interesting… and we’re talking about the same writers as Code Geass here, so I am definitely looking forward to this >=D

Persona 4 takes in a rural town named Inaba.There have been mysterious murders occurring whenever there was fog after heavy rain. There were also rumors about a channel on television airing only at midnight called Mayonaka TV, during which it is said that one can see his/her “other half” when staring at the TV screen. After hearing about a recent unsolved murder which occurred during the fog, the characters—the main character, Chie, and Yōsuke—discuss how each of them had attempted to watch the mysterious TV channel and witnessed the murder victim.

I’ve never played the game or anything, but it does sound nicely creepy so this is definitely an anime I’ll be following. Besides – it’s probably the yellow background – but it reminds me ever so discreetly of Durarara!!! and – it’s probably the whole murder and isolatd town thing – Shiki.

The latest upcoming from noitaminA is [UN-GO] a mind-numbing series hinting towards an ideological story of population controls, world orders, and mass experimentation expected to air this October.

Go check out the official page. Holy shit, this is going to be so awesome >=)

High school 2nd year, Amano Yukiteru, is a boy who has problem making friends. He thinks of himself as a bystander and will always write down everything he sees in a cell phone diary. Tormented by solitude, Yukiteru began to imagine things like a friend called Deus Ex Machina who is apparently the Lord of Time & Space. Seeing Yukiteru’s miserable state, Deus gives him a new ability. His diary will now record events that will happen in the near future. Yukiteru is then forced to participate in a game which the winner will become Deus’s successor.

It’s been awhile since I read Mirai Nikki – and I didn’t stop because I got bored of it or anything, I stopped coz honestly speaking… I was getting a little too freaked out by it. Mirai Nikki is probably one of the top psychological genre reads out there, and I was a wee bit young at that time to appreciate that concept. I really did enjoy it, I just couldn’t handle it. But now that I’m old and all, I am ready for all the diaries and creepy stalkers for the fall. Ohhh, yeahh….

In 2016 a meltdown of a nuclear power plant creates a big catastrophe in Tokyo. 20 years later, the city has become a ghost town due to the high levels of radiation. From that area a distress signal is received, the Self-Defense Forces dispatch 3 girls from the special unit Coppelion to search for survivors. But why aren’t they wearing any protection against radiation?

I haven’t read the manga for this, but I think I might pick it up now. It actually sounds pretty interesting!

Daimon Kaito is a high school boy, who loves puzzles. One day, the president of the student council gives him a mobile device and it leads him to an underground ruin buried in the school. He challenges an ” insolvable puzzle” hidden in the ruin with his girlfriend Nonoha, but the puzzle turns out to be the dangerous “The Puzzle of Sage” created by the black society “POG”. He manages to solve the puzzle but it’s the beginning of a puzzle battle against POG.

Horizon on the Middle of Nowhere (Kyoukai Senjou no Horizon)

The story is set in a distant future where Japan is divided into feudal territories and conquered by other countries. There is a floating city named Musashi that is composed of eight ships in the skies. A war that will determine the fate of the world will be fought by students on the Musashi. 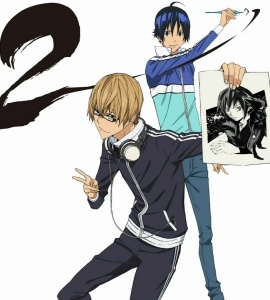 Moritaka Mashiro and Akito Takagi are pretty much foils of each other. Mashiro, an average 9th grade student but talented artist, and Takagi, an overall advanced 9th grader and aspiring writer. After great convincing, Takagi convinces Mashiro to join him in becoming the greatest mangakas Japan has ever seen. Takagi, with his gift of writing, hopes to become a successful mangaka, and Mashiro, with his gift of art, hopes to marry the girl of his dreams, Azuki Miho.

Well, I wouldn’t say I’m excited for this… but Hiramaru should be appearing by the 2nd season since that’s where the 1st season left off. And a little bit of Hiramaru always makes a lot of good =D

I’m not gonna wail in despair if it airs or not either way – I do love the manga, but there’s not much feeling I get off the anime. It’s like. Animated manga. I mean, like, the actions (i.e. writing and talking and drawing) aren’t really something I desperately want to watch in an anime, even if it is from one of my favourite manga.

But I’ll watch it anyway.

Fate/zero takes place 10 years prior to the events of Fate/stay night, detailing the events of the 4th Holy Grail War in Fuyuki City. The War of the Holy Grail is a contest in which seven magi summon seven Heroic Spirits to compete to obtain the power of the “Holy Grail,” which grants a miracle. After three inconclusive wars for the elusive Holy Grail, the Fourth War commences.

Prequel to Fate/stay night. I don’t remember much about it since I only watched a few episodes, now might be a good time to go dig it out from my cupboard =3

The story takes place in Seto Inland Sea and is about a girl who likes taking pictures.

One day the high school student Yachi Haruaki received a mysterious black box sent by his father from abroad. It was a “Cursed” object which could assume human form. The black box whose name was Fear came to Haruaki wanting to rid herself of the curse. Together with Haruaki and his boarder Konoha, Fear decides to do helpful things in order to neutralize the negative energy that was built within her, to be free from the curse that bound her. 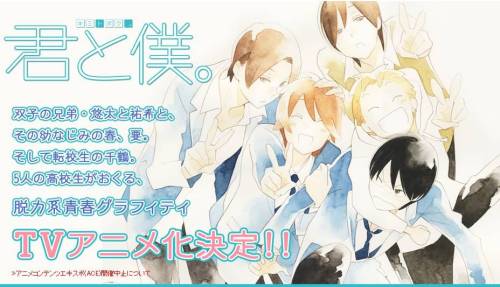 Shun, Kaname, and the twins Yuuki and Yuuta have been friends since kindergarten. It’s a little hard to tell if they actually get along or not – but even as high-school students, they hang out together. Recently, they’ve had a new addition; a half-Japanese transfer student Chizuru, who has started to liven up the group. This manga is really just about their daily lives, which aren’t particularly passionate or exciting. A tranquil and sometimes comedic story of youthful friendship..

I’ve actually read a bit of the manga. It’s the very normal day-to-day life sort of story which reminds me a little of Nichijou, and it has that everything but explicitly announced shounen-ai which reminds me of Kuroshitsuji. The story’s really quite cute though =D

Arsene Lupin III is the grandson of the master thief Arsene Lupin. With his cohorts Daisuke Jigen and Goemon Ishikawa XIII and his love interest Fujiko Mine, he pulls off the greatest heists of all time while always escaping the grasp of Inspector Koichi Zenigata.

I know it’s a classic, but I’m ashamed to say I’ve never read or watched it. Time to change that!

I couldn’t really find a synopsis and got too lazy to hunt for one. Oh well. Gundam is Gundam. Go reel in the cash Bandai >=)

According to Animedia August issue, producer Nakayama Nobuhiro said the OVA series “Shakugan no Shana S” is followed by the third season.

I never really liked Shakugan no Shana. Has a big fanbase though, so I suppose a lot of people are happy about this.

Based on the adult visual novel, it’s a slapstick comedy story of the original game is set in a modern-day school and features a boy named Yamato Nanoe who is surrounded by all-warrior female cast… and it’s being directed by the same guy who did School Days. There are people out there who didn’t even watch that anime… but still knows how it ended.

The story follows the hapless life of Osamu Fujiyama, 33 years old and NEET (Not in Education, Employment or Training). I wasn’t even aware that there was a season 1 (it’s supposed to be part of the spring anime). I can’t actually find a solid source for this, only found it on fansubwiki…

Hope you all have an enjoyable weekend! =3