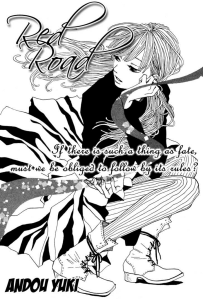 Kazuka is your average high school girl with the exception of having an irregular personality. She wakes up one morning slightly later than usual to find a red thread attached to her finger…

Published as a one-shot in The Margaret 2009.

I won’t blame you guys if you’re sick of my one-shots (I am) – chungky’s usually around to balance out our posts, but since we’re trying to keep in schedule with our Betsuender projects… certain amounts of dedication are needed. (By the way, we just released the 2nd chapter of Shirube no Michi, so go here to check it out!) Oh well.

I’ll try to make up for that absence with a nice shoujo one-shot this weekend – Akai Michi.

It’s been awhile since I’ve read a slice of life one-shot. I forgot how good it always makes me feel – short, simple, and (more often than not) really, really sweet. Akai Michi is no exception; the extremely matter-of-fact way the heroine tackles the whole red string of fate might seem a little creepy at first -especially with that monotone atmosphere that kinda reminds me of Mihara Mitsukazu’s

Children Can’t Choose their Parents (that was one really weirdly funny one-shot). However, that ‘creepiness’ was completely over ruled by the ending – it turned out to be a really, really sweet romance story. It brought into question the whole fate vs. free will thing for me; if in the end that red string was something created by fate, or if it was of her own making.

A really nice one-shot to just recline to this weekend!