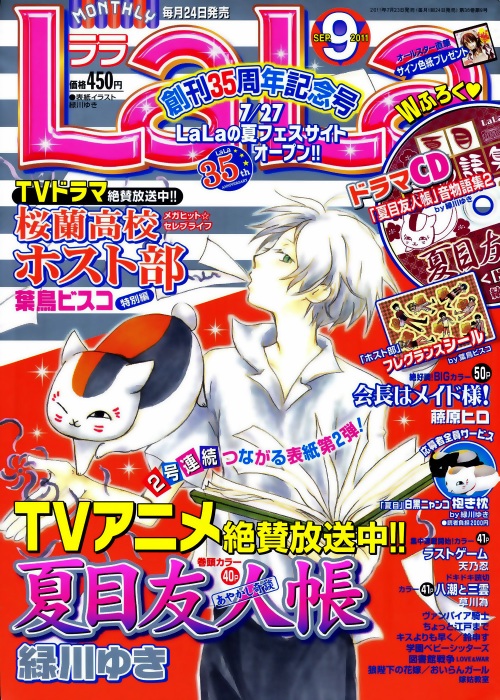 Been wanting to blog all week but my brain just keeps farting and I just come up with noob drafts. Anyway, behold, my mouth-watering friends – Takashi sparkles on the cover of Lala 9! It’s a very nice wispy cover! Kudos to Midorikawa Yuki! I’ve pierced together Lala 8 and Lala 9 together in the image below to show you lot that they’re actually connected! END_OF_DOCUMENT_TOKEN_TO_BE_REPLACED

Heya folks! This post is totally late due since Lala 9 has already been released! I have yet to make my order on amazon but I might wait until Lala DX 9 is available so I can ship them all at once. I hope I can be that patient since Amano Shinobu has her new work in Lala 9, very excited! END_OF_DOCUMENT_TOKEN_TO_BE_REPLACED

These few days I struggled to think how I would write a full length essay. The situation is getting out of hand since my writing skills have not awoken even with my exam approaching. So, as I tried to escape from my exam induced stress, I decided to take a short-term solution by watching Anime. I beg all of you not to follow my example.

Having no idea with what to watch, I settled for Library Wars since I wanted to catch up with the Love and War manga adaptation by Kiiro Yumi. Oh, just a note, the Library Wars Anime isn’t licensed and it should very well should be. It’s fantastic! But what really triggered me to write this post was initiated by the concept of Library Wars by Hiro Arikawa.

What may that be you ask?

The plot is derived from Japan’s statement of intellectual freedom for libraries – which basically means that libraries have the freedom to offer and collect any material, as well as disregarding censorship. The freedom of expression.

The conflict starts here; in the story, the government passes the Media Betterment Act which gives the committee the power to remove and censor any type of media that could pose a threat on Japanese Society. It’s almost like the Gestapo of Hitler Germany. Pretty deep stuff. Joining the side of free expression is no other than the Library Defence Agency, set up by local governments who oppose the Media Betterment Act.

END_OF_DOCUMENT_TOKEN_TO_BE_REPLACED

Hello everyone. Here is Lala magazine’s 5th issue this year featuring Kotarou in a Scottish Outfit. Kotarou is from Gakuen Babysitters by Tokeino Hari.

Also information about Hotarubi no Mori E, visit here for the official website and here for the twitter page.