RDG: Red Data Girl – All the WTHs from Episode 8

So one of the anime that I’ve been following this spring (Spring. Haha. What a joke) is Red Data Girl (RDG). It was one of the earliest to come out, and I’ve been underwhelmed by it from the very beginning. For some reason however, I just stuck to watching it anyway. It’s quite mean, but it’s the sort of anime I watch just to hate on. I mean it’s just so – well – tweeny.

Anyway usually I’d just go on about how ridiculous it is to chungky, but after episode 8, not even my trusty partner was enough. Apart from all the ongoing teen angst, everything in the episode suddenly seemed abrupt and unnecessary. I don’t know if it’s just this episode in particular, or if I’ve already had enough of the story that I’m paying attention to other things that have been quite random from the beginning. Anyway, here’s my thoughts of this week’s episode, starting with the OP!

Having some sort of unknown character in an OP song would usually serve the purpose of adding more mystery to the story. It heightens the anticipation of ‘so when is that character going to pop up? Who could that possibly be?’ For those of you who have solved who the shining young man in the OP is, do tell me. I’ve been trying to figure it out this whole season. It’s just not obvious enough.

Gosh I wonder who this mysterious character is

RDG also provides some useful dating tips every week, e.g. make sure to brush your teeth for a bubbly/foamy/sparkling kiss!

Okay so now I’ll move on to what happens in the episode. There were just some moments this time round that gave off more than the usual WTH-just-happened feel. We’ll start with when the male lead has a private chat with the female lead. 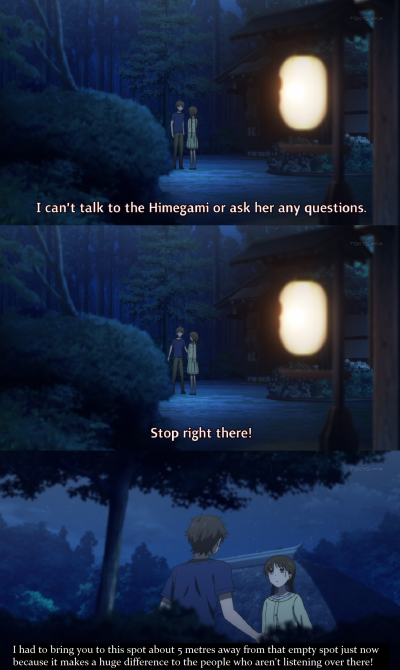 When this scene came on, I simply could not stop laughing because I just did not see the purpose of the relocation. It’s like that scene was there just to give the male lead a chance to take the female lead by the hand and lead her from a non-shady part of the front yard to a more shady corner of the front yard (smooth move bro). Besides that, is that minor shift really going to make a difference over whether others can hear them or not? Was it really necessary in the first place?? It’s not like there were any ninjas around to eavesdrop anyway.

Next rant is about the part where RDG turns into some sort of mahou shoujo anime, where Izumiko pulls out a miko costume from the magical air of the spiritual world. After spectacularly achieving this feat with no explanation of how she knows how to whatsoever (and here I thought she only knew how to dance), she abruptly throws her cool aura out of the window by turning around and demanding for a fan. Conveniently, the other dude always carries a spare fan on his person to keep him cool during the hot summer days.

Moving on a little more to Izumiko’s character – there’s just something about her that doesn’t quite click with me. She’s definitely not the usual character type that I like – in fact, I’m more inclined to dislike weak heroines that tend to just hide behind everyone. In this case however, I don’t hate or dislike Izumiko. All I have is just this flat emotion towards her after the numerous WTH moments from really just how useless she is. It’s come to the point where she doesn’t seem to portray some weak shoujo character, she just seems so useless that I can’t even seem to bother about her anymore.

There’s this hand-holding thing about anime/manga/drama that I can’t really seem to get my head around. RDG is one of those anime where these scenes seem to crop up more often than usual. I mean sure, it’s romantic and sweet if you’re walking down the mall or park or school or whatever, but when you’re running away from a monster? Like honestly, I understand that the dude wants to be the brave hero that the heroine can rely on, and the heroine wants the comfort of her loved one (“The heat from his hands dissolved into mine, easing my fears – I only just noticed how cold they were.  I could feel his pulse thumping through his tight grip,  as if the beating of his heart was being transferred to me, telling me he’d never let me go!”) but have any of you tried running while holding onto someone else’s hand?

Something else that I couldn’t accept was the amount of unnecessary talk – and what’s even more baffling was the fact that the grouchy male lead even bothered replying. He seems curt enough when she’s asking sensible questions in a safe atmosphere, but becomes the perfect answering machine in the face of a massive dragon that’s kinda trying to eat them. Although nobody knows why. How can you be so sure that the first thing the poor thing wants to do once he’s free from his cave is snack on you anyway?

The most abrupt moment for this episode however shall be awarded to the ending scene. They were at the train station where practically every story leaves off, and just when I was expecting that it would move on to the ending soon, the ED starts singing without so much as a by-your-leave. Yes, the story does continue on for a bit after the ED finishes but surely there had to be a way of adding a bit more tact to the transition. 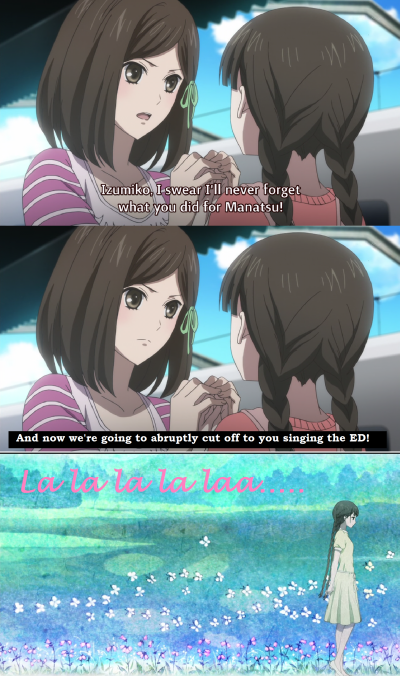 There’s a lot I could go onto about the anime, but those are really just my pet peeves and this post is already way too long – this rant was more for the stuff that I just really could not accept. I’ve written a proper review about RDG that was supposed to be in this post, but it became too long so both chungky and I agreed it needed to be split. It’ll be out soon once I get the pictures and things, so do look out for it!

I’ll end this post with my final rant for episode 8, which has to do with how Izumiko’s mum sort of just came and went – it just felt really random and disconnected. I suppose one can argue that it has  to do with her ‘cool’ character type that just flits about everywhere and does what she likes. However the way she was all kthxbai felt more like some random character that had nothing to do with the story strolling in and then just Horatio’d herself out. Anyone else get the feel?

One response to “RDG: Red Data Girl – All the WTHs from Episode 8”