Hello Manga Weekend readers–my name is Justin. I happen to be a writer/co-founder of Organization Anti-Social Geniuses, and I’m thankful that Chungky has allowed me to write about a manga series that I’m guessing 90% of the manga world does not know about–mainly because I would have never discovered it had I not wasted my time last year at AnimeNext’s Manga Library. Back then I was looking to consume all sorts of manga that had interesting title names (or find works of anime series–like Record of Lodoss War)–naturally, Doujin Work happened to be on the list. Doujin of course is widely known in Japan, and while there are a number of underground series that are tame, most Doujinshi mostly involve a guy “getting” the girl–or an alien “getting” a girl. Yeah, you should be getting the picture about Doujin now! So of course, I decided I would read it.

Next thing I knew, I stayed in the library just to read chapter after chapter of these crazy people’s Doujin stories.

The story begins with high school student Najimi Osana seeing one of her classmates Tsuyuri seemingly tired–but after asking why, she automatically assumes she’s making dirty works (and she was)–and from there, Najimi gets thrust into the world of Doujinshi. She attends Comiket, and after hearing the unrealistic (although possibly true) amounts of money that artists can make on their works, she gets hooked on comics and decides to draw one too. Of course, it doesn’t quite work out just like magic–mainly because she sucks at drawing. So for most of the first volume we are introduced to her crappy Doujin, which not only doesn’t sell, but gives her a stalker in Junichiro Hoshi, a guy who seemingly looked dreamy in the anime version (or what I watched of it), but is a helpless, easily manipulated man who likes everything about Najimi…which is why he goes every day to the maid cafe where she works, why he always buys her crappy works, and even took her to a love hotel.

Yup, the definition of a classic stalker.

But, as expected, she eventually overcomes that disaster because she likes drawing Doujin–in fact, she likes it so much that she decides to move out of her house and drop out of school (Forgetting that she used someone else’s money to buy the house).  Little did I realize that, after I finished Vol 4 of Doujin Work in the Library and asked, “You guys don’t have Vol 5,” I later learned that production stopped. Media Blasters, the ones who brought the series over, apparently was only able to license up to four volumes–there were two more volumes left! Why can’t publishers just finish what they started–I mean, it’s not like it was a long running shonen series–and there were only two more volumes! But then again, I think Media Blasters has discontinued their manga licensing…

Anyways, ignoring Media Blasters and Houbunsha (the Japanese publishers), what I had read up to was hilarious and possibly true. The mangaka, Hiroyuki, makes no bones about being as crass as he can in a Seinen magazine (This was serialized in Manga Time Kirara Carat), putting in enough 18+ jokes that will leave a person laughing. The characters also are a part of the hilariousness–forget Najimi, the supporting characters around her are great fodder for laughs. Tsuyuri (with her pen name “Bloomer Girl”) likes to see others suffer, so even though she invited Najimi into the Doujin world, she cracks on her every single time. But it’s not just her Tsuyuri plays around with–Sora (Pen name “North Sky”) is one character that is about up Tsuyuri’s alley since she’s about the size of a grade schooler. And she’s dating (though I’m still not sure if they were “dating”) Justice (pen name: “Justice), who I thought was fairly old–except he still goes to high school. Still, the age discrepancy is apparent and so obvious–why wouldn’t Tsuyuri seize the opportunity to tell it as it is? 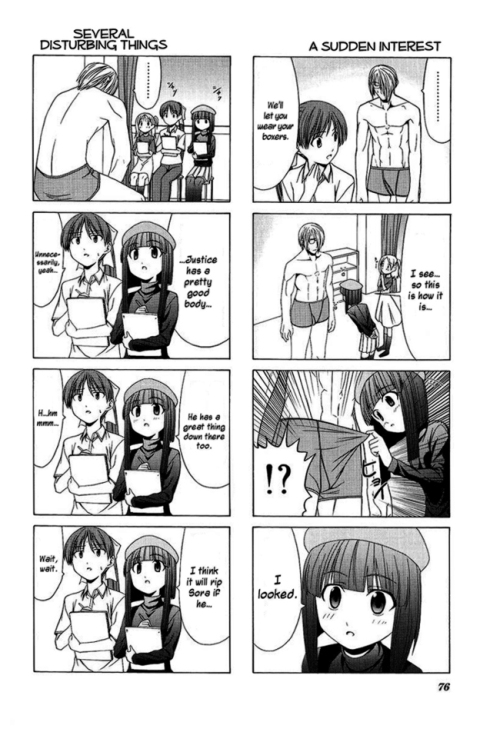 Still, even though this manga needs to rely on its jokes, it does paint an interesting picture about how hard you have to work at drawing your Doujin. It shows how much you really need some type of willpower, especially since there’s a chance your work can get overlooked, you aren’t working for a publisher, and you usually don’t have an editor. Hence why Tsuyuri also invited Najimi to try and get into drawing–it’s more fun with friends. Though, I still think some things are an impossibly (no Justice, you cannot draw a 500 page work and still have all three issues of your current work in over a month). So, in its own way, hard work equals attaining glory. I think that’s what it’s saying.

Anyways, the first four volumes have been licensed by Media Blasters. You’ll have to rely on other sources to finish it. Which I still haven’t btw…

3 responses to “This Genius’s Manga To Highlight: Doujin Work”