Henpukumaru awakens in the mansion of her enemy. She is introduced to the future lord of the mansion, Chiyozuru. Chiyozuru is able to get the unemotional Henpukumaru to smile and react differently than she normally would. The mystery remains though – who was she in the past?

Published as one-shot in Shounen GanGan 2006.

I was in one of my post-FMA moods, so I ended up picking Sôten no Kômori since it’s also another one of Arakawa’s works. It was my second time reading it, and I don’t know why but for some reason I enjoyed it more this time round. Hence, I bring it to you as this week’s one-shot =)

It starts of rather typically – the character gets saved by some rich family after collapsing at some random place. The way the story develops from then on however

, has more of a realistic touch – the same level of realism that is implemented in Arakawa’s infamous Fullmetal Alchemist (or, at least, as realistic as a fantasy setting could get).

I particularly liked the action scenes – weapons, fighting, creeping around… It’s nice to once in awhile go back to pure action that relied on physical skills and was humanely possible instead of spamming ninjutsu and bankai.

the ending felt really complete and well-rounded (the best trait I found about FMA)after all that had happened in the past 60 pages. Despite everything that occurred, the story didn’t feel rushed either. Although Sôten no Kômori isn’t anything like FMA, Arakawa’s trademark skills are definitely exhibited in this one-shot that you really shouldn’t miss out on this weekend =D

Tagged as Arakawa Hiromu, Bat of the Blue Sky, 蒼天の蝙蝠, Manga, One Shot for the Weekend~, One-shot (comics), Shounen, Souten no Koumori, Sōten no Kōmori

Mangaka of the Month~ Arakawa Hiromu 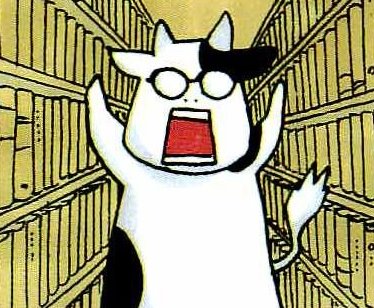 Hiromu Arakawa is a Japanese manga artist from Hokkaidō. Arakawa’s career started with a work titled STRAY DOG, but she is best known for creating the Fullmetal Alchemist which became a hit both domestically and internationally, and was later adapted into two television anime series. She often portrays herself as a bespectacled cow as she was born and raised in a dairy farm with three older sisters and a younger brother. Arakawa started out as Etō Hiroyuki’s assistant writer for Mahōjin Guru Guru and a friend of Shakugan no Shana author Yashichiro Takahashi. END_OF_DOCUMENT_TOKEN_TO_BE_REPLACED